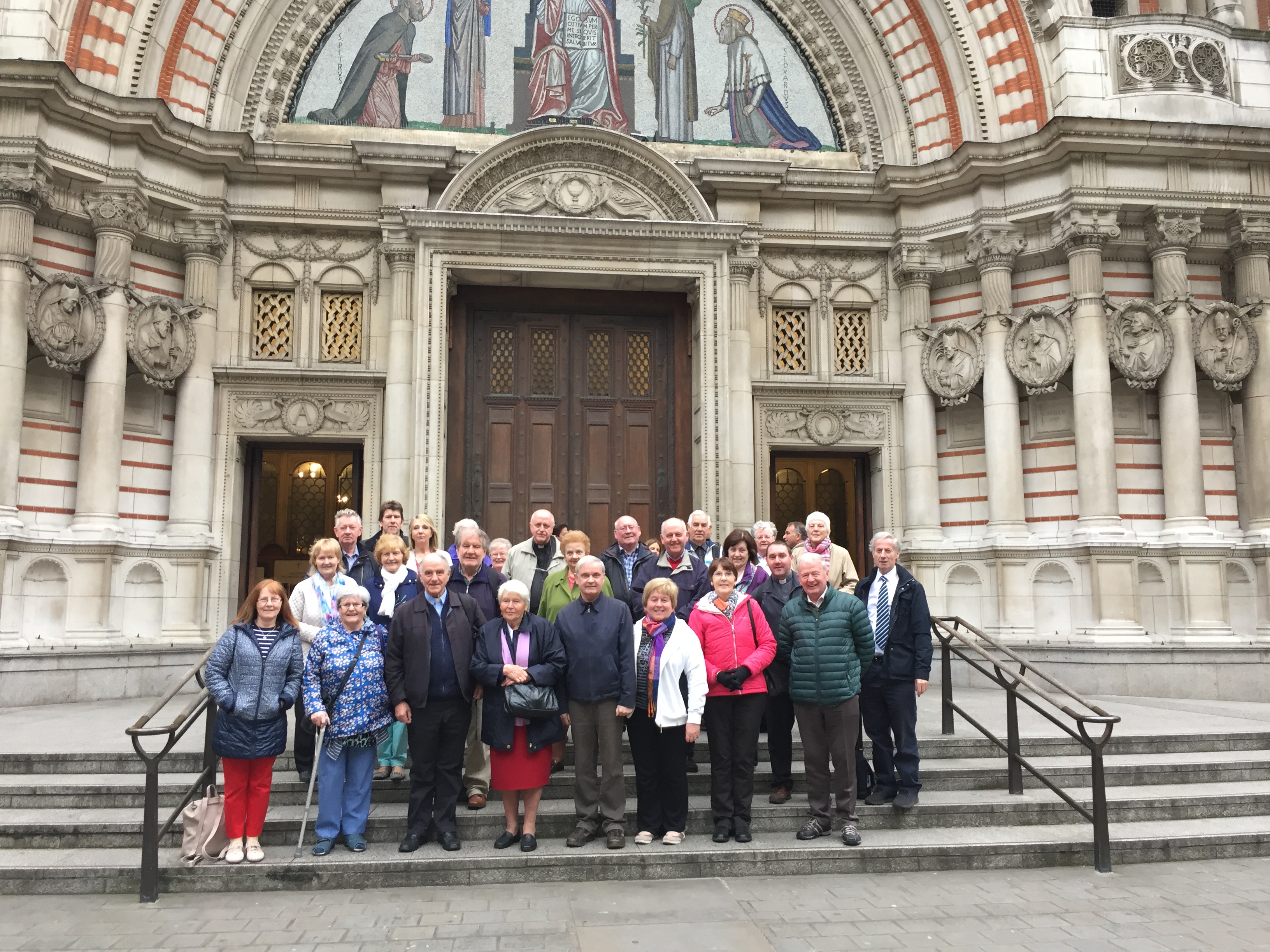 (please see the associated pictures in the picture gallery)

Last week (1st-5th May) 26 pilgrims set out from our parish to journey the footsteps of St. Oliver and celebrate Mass in Tyburn where he was martyred.

Setting out at 6am with Matthews Coaches we were led and guided most superbly by John our bus driver who cajoled us and joined in the craic. He made the whole journey so smooth as he guided us to our hotel in Chelsea on the first day. When we arrived we found the Hilton Hotel on the banks of the River Thames that would provide a spectacular backdrop for the next few days.

The next day we travelled to Marble Arch by bus and celebrated our own private group Mass (as you can see in the photos), celebrated by Fr. Brian and assisted by Fr Aodhan and Fr Dan. After the Mass a nun from the convent in Tyburn (where they have perpetual Eucharistic Adoration) gave us a tour and historical talk on the significance of Tyburn and St. Oliver Plunkett.

In the Mass Tommy Burns who has written a very comprehensive book on St. Oliver led us in reflection on St. Oliver Plunkett’s life and dedicated witness to the Irish people and in particular to the Armagh Archdiocese.

After lunch and a break in Oxford St. – we did the tourist traps of London. Driving past Buckingham Castle we arrived at Westminster Abbey, Westminster Hall (where St. Oliver was condemned by trial) along with the Houses of Parliamant, Westminster Bridge, Big Ben, Downing St before witnessing the changing of the Household Cavalry at Horse Guards on the way back to the bus. In the evening we had a nice meal and many pilgrims went for a pleasant stroll along the Thames river

On Wednesday, John our affable bus driver guided us along to Westminster Cathedral where we celebrated Mass in Latin where some old altar servers in our group showed off their memory of earlier days. After the Mass we had an extensive guided tour of Westminster Cathedral by a brilliant and very witty tour guide called Anne-Marie. It was riveting to see the work put into adorning the side altar of St. Patrick and the Irish saints. As Anne-Marie explained to us – the Mosaic of St. Oliver Plunkett they have is one of the most exquisite in their Cathedral. Anne-Marie let us explore all around the sanctuary and choir galleries that most tours don’t get to do. Tyburn is two miles from Westminster as seen in the mural in the side chapel of the English Martyrs. We were then told the amazing story of St. John Southworth who was martyred and hung drawn and quartered but later his body was stitched back togther and they proudly display his body in the sidechapel of St. George and the english Martyrs – remembering “the blood of the martyrs is the seedbed of the Church”. We concluded our fantastic tour of Westminster Cathedral by visiting the relics of St. Oliver Plunkett.

In the afternoon some pilgrims went to see 7 letters written by St. Oliver Plunkett to find that in one letter he was intending to travel back to Ireland and would be stopping in Chester on his way back to Ireland – just as our pilgrimage would be doing (coincidence or once again another subtle indication of St. Oliver Plunkett guiding us from start to finish). In the evening most of the pilgrims went into the West End to see a play

On Thursday we set off for Brompton Oratory to celebrate Mass and on the way Tommy (the font of every bit of knowledge on the life of St. Oliver Plunkett) informed us that St. Oliver was very friendly with the Oratorians and always celebrated Mass with them when he was in London -just as we would be doing that morning. We had our own private group Mass where Fr Dan was the main celebrant and Fr Aodhan preached in the most beautiful of settings. The oratory was a real delight to pray in, to celebrate Mass and to have a walk round afterwards to see the different relics, statues and side chapels.

We then set off for Chester whereby after arriving at the hotel we went into the city and explored the old Roman Town at our own pace. It is the most picturesque of towns to amble around.

On Friday morning we set off and visited the town with the longest English name in the world (but it is a Welsh town) . Try to pronounce this:

After shopping and buying  a souvenir or two we boarded the ferry at Holyhead and embarked for home.

It was a remarkable few days of prayer and of learning so much more about St. Oliver Plunkett and his dedication to the people of our Archdiocese. He is a saint that walked the fields and by-roads of Haggardstown and Blackrock as he called Ballybarrack his Pro-Cathedral.

The craic was mighty too. The whole group bonded so well and everyone had a fantastic pilgrimage with time for sight-seeing, entertainment and good food each day. On the bus journeys we made new friends with one another and the people from outside our parish who joined us brought their part of Ireland onboard with them.

When someone asked me how the pilgrimage went my honest answer was, “It was brilliant, in fact, I don’t think it could have gone any better than it did” as St. Oliver with the little nuances and connections here and there was obviously leading us from when we started planning for it months back.

Or as Anne from Co. Dublin said with great wit: “It was the perfect mix of the sacred and the profane”

Again thank you to all who particiapted and made it the great trip and pilgrimage that it was.

St. Oliver Plunkett pray for us