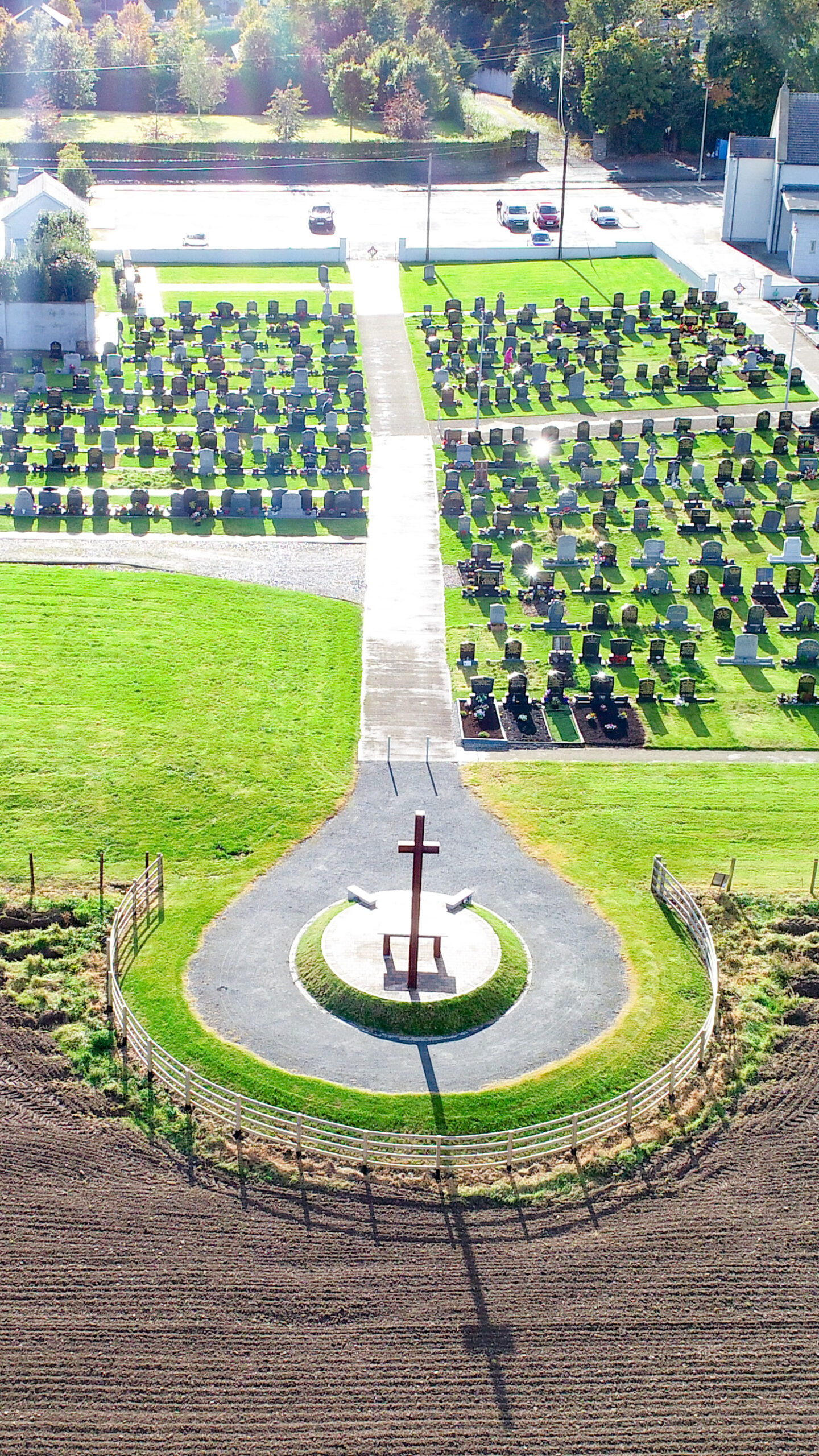 These payments will be billed direct to the undertaker, and to the  monument erectors.

SEARCH FOR A PLOT

Haggardstown Graveyard.
Love ones, headstones, surrounds, flowers
are all neatly laid down in this graveyard of ours,
which constantly expands it’s width and it’s breadth
in an ever increasing rectangle of death.
It welcomes our visits and
Patrun processions and zealously guards it’s earthly possessions.

As they now are, we will be the same,
someday resting below our name.
Other loved ones will tender our graves,
keeping them free from weeds,
wistfully remembering our earthly deeds.

As far back as the 1820’s, there had been complaints about overcrowding in Haggardstown (old graveyard). As a result, putting its old burial grounds in order over 100 years later was even a task that would prove beyond the powers of the redoubtable Canon Bernard Donnellan, P.P. The graves were so mixed up and the living relatives of the deceased so opposed to ant interference, that he judged it wiser to leave things alone.

But Canon Donnellan did manage to secure a plot behind St. Fursey’s Church, Haggardstown from the McGeough Family and was endeavouring to purchase another plot at the rear of Blackrock Church at the time of his death on 20th July 1936. Canon Donnellan was the first to be interred in the new cemetery. (Mrs Margaret Malone, Dublin Rd, Haggardstown, who died on 30th Sept 1936, was the second person to be buried in the new graveyard). At that time, the purchase of plots in Haggardstown new cemetery varied between 30 shillings and 3 pounds, depending on location.

Johnny Nugent of the Marlbog Rd was the gravedigger throughout this period. Greta and Cissy Kenny of Marlmount House acted as St. Fursey’s  Church caretakers while Barney Courtney performed the same role at St. Oliver Plunkett Church. Eddie ‘Ned’ Thornton acted as sacristan in St. Fursey’s Church from the mid 1940’s until his retirement in the late 1980’s, upon which the role was taken up by Brendan Reenan and lately by Sean McAleavey.

Tom Halpenny of St. Fursey’s Tce acted as gravedigger during the 1970’s and 80’s.

A piece of land, extending to the Canon’s Pass, was opened in the early 1980’s as an extension to the existing graveyard at Haggardstown. This plot, the generous donation of Jane and Michael McGeough, is, with the death rate among a rapidly expanding parish population, sadly filling up all too quickly.

John Murphy and Tom Jordan of Blackrock had by this stage, taken over the role of gravediggers. In June 2003, a further 2 acres was generously donated by the McParland brothers to extend the cemetery at Haggardstown.

2013: Notes on the Annual Patrun in St. Fursey’s Graveyard. (By Harry Lee)

The Blessing of the Graves at St. Fursey’s Cemetery on Sun, July7th drew a huge crowd, and amongst the congregation was local radio personality Harry Lee. With many years of experience in the entertaining and broadcasting industry behind him, Harry found himself very impressed with the event, which was organised by Fr. Padraig Keenan, and Harry had this to say…..”Fr. Padraig and his team did a fantastic job in organising the Patrun this year. What made my night was the brilliant sound system. It was the first time that I saw everyone taking part in the prayers and hymns, simply because they could hear what was going on!” “In my memory there has never been a successful sound system to allow people to hear what was going on, to the point where sometimes people would leave the service early, thinking it was over. I was delighted therefore at this year’s Patrun, to see that everything had been put right by Fr. Padraig and his team. So well done Fr. Padraig!“  “I have been attending the Annual Patrun in Haggardstown Graveyard every year of my adult life. I have a great affinity with the graveyard as my mother, father, step-mother, aunt and my wife are all buried in the cemetery. I have great memories of my father taking us to the graveyard there when we were children, as my mother died in 1944”. “other improvements of note in this year’s Patrun were the turnstile gates left open to allow everyone to walk through (not as before when we could only proceed one at a time) (There used to be) cow manure on the pass, this year the pass was spotless”. “Cars were able to come right into the centre of the graveyard, where there were stewards, directing them to a proper area and parking space”. The priests were very well organised with the grave blessings in our area, being done on an individual basis by the priests, not just a few as they walked by as formerly”. “I spoke to a lot of people last Sunday night and they were just delighted with the whole way the 2013 event was organised”. “Thank you Fr. Padraig and all your team”. From the Argus and Dundalk Democrat.

The enormous congregations now attending the Paatrun necessitates a huge amount of organization. The graveyard is lovingly maintained by St. Fursey’s Cemetery Committee. An Garda Siochana supervise the traffic with members of  Na Gearaltaigh G.F.C. stewarding the carpark.

The Garden of Angels Plot 2014. Designed by Sheehan and Barry Architects of Dublin. The work for an evocative Garden of Angels Memorial plot in the cemetery, was undertaken and carried out by Haggardstown Garden Centre and officially blessed at the Annual Patrun and Blessing of Graves on the first Sunday of July, 2014.

In 2016 in meeting the intentions of those who wished to be cremated and to be buried independently of a traditional grave, the first Columburial Wall was erected in the cemetery. An undertaking guided by the direction of Sheehan and Barry Architects and carried out by M.J.Duffy and Sons Ltd, has been sensitively fulfilled and is truly appreciated by all.

Acknowledging all the improvements undertaken to the cemetery since 2011, something was missing in a focal point within the sacred Burial Ground. Thus a Calvary Scene was constructed with a Corten Steeel Cross in 2019, and was blessed at the Annual Patrun on the 7th July, 2019.

St. Fursey’s Cemetery is a peaceful resting place for one’s loved ones, and a source of comfort for all who visit and share their time within the cemetery.